Can You Tell They Are Sisters??

When I take hundreds of photographs of someone, I can't help but catch their little mannerisms on film. For example, my husband is a blinker. If I take 500 photos of him, it is a given that he will have his eyes closed in at least 100 of them. Some people have little nervous habits that they do like licking their lips, or fussing with their hair. Some people make certain faces or do certain hand gestures over and over again. It's really not a big deal, and everyone has them. However, by the time I've spent several hours photographing someone and then editing their photos, I come to know these faces and mannerisms pretty well.

Last summer, I photographed McKenna's older sister, Jessyka. Jess has a face that she makes over and over again, and I caught it on film a lot while taking her photos. On Sunday when I was taking McKenna's photos she kept making the same face, and I kept telling her to stop making "the Jess face". I only caught McKenna doing it a few times in the photos, but I just couldn't resist putting a photo of the two of them together with their similar faces... 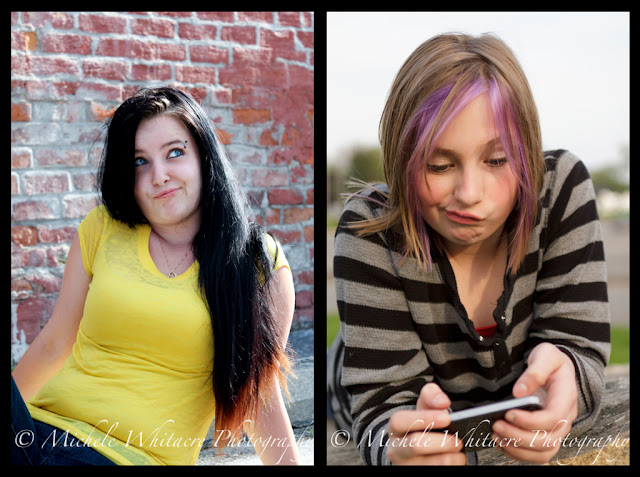 You can't tell that they are related or anything can you?

Michele Whitacre is a portrait photographer currently located in Fort Wayne, Indiana. Michele will be relocating to Phoenix, Arizona during the summer of 2011. Visit Michele's website at michelewhitacrephotography.com. Become a fan of Michele's work on Facebook. Follow Michele's updates on Twitter.
at May 10, 2011

Email ThisBlogThis!Share to TwitterShare to FacebookShare to Pinterest
Labels: Just for Fun