Street Photography {on a whim}

I know I've mentioned it before, but I am a portrait photographer at heart. While I love experimenting with other subjects, my first love will forever be taking pictures of people.

I spend a lot of time looking at portraits taken by others, and I am always drawn in by the gritty, real life photos often captured by street photographers. Many of the images seem to speak a truth that words could never convey, and the haunting images have become a part of my soul.  While I long to capture the same types of portraits myself, the simple truth is that I don't have the guts.  I've lead too sheltered of a life to feel safe or comfortable spending time in the inner-city areas where so many of the images I love so much are taken.

However, I have been toying with the idea of taking street photos in more warm and fuzzy areas of the city.  Not too long ago I posted a thread on Facebook asking for opinions about how people would feel if they were approached by a stranger asking to take their photo.  The responses were mixed, and I'm still a bit hesitant to jump in with both feet and try my hand at it but I'm still giving it very serious consideration.

Which is probably what made me take the following photo while I was photographing my husband recently.  This girl was sitting there on the ledge, talking to a male who was sitting inside the opening on the other side of that large cement structure with the writing on it.  I was taking photos of Kevin, and she was off to my left just a little bit.  On a whim, I turned slightly, aimed the camera at her and fired off a quick shot.  I felt a little silly taking her photo, and barely took a second to compose the shot before pressing the shutter, and quickly turning the camera back toward Kevin.

You can image my surprise when I got home and looked at the image, only to realized that I actually liked it.  I look at it and can't help wonder what her story is... who is she?  where does she come from?  who is she talking to?  And then there is the writing... who wrote it?  who was the intended recipient? was it this girl or someone else?  if it was someone else, did she see it?  There's just also something about the position of the girl and her expression that I find myself drawn to for some unexplainable reason. 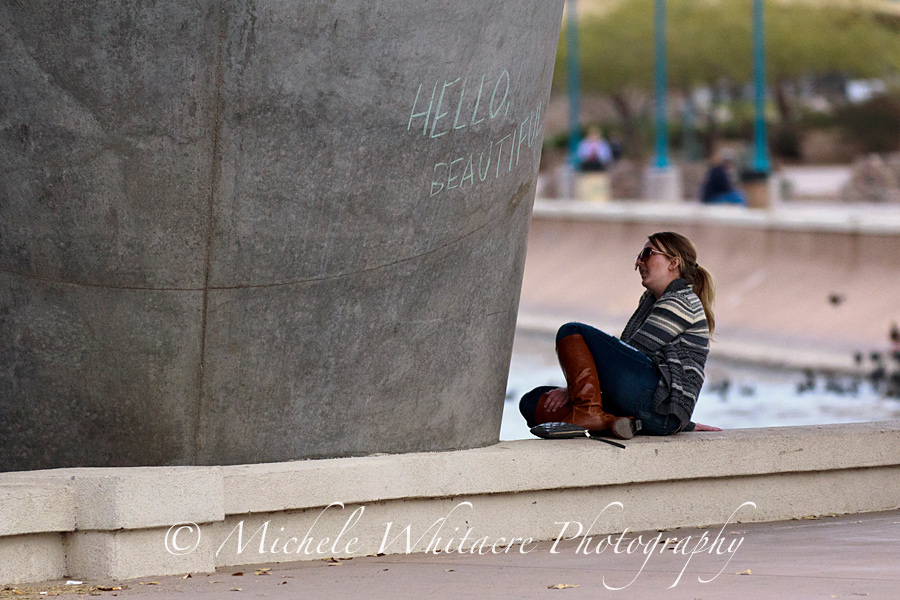 I will probably find myself taking more street images in the future, but I suspect they will probably be images I take on a whim, like this one. It will take a while to work up to being able to walk right up to someone and asking to photograph them.

So, have you ever done any street photography? If so, what was the experience like?