After a childhood spent shying away from life because of a fear of failure and/or looking stupid, I have turned into an adult who refuses to allow fear to rule my world or dictate my decisions.  Yet, that was exactly what I was doing when it came to photographing weddings.

At first, I refused to photograph weddings because I knew that I simply didn't own the equipment required to do so.  I don't care what anyone says, equipment does matter, and there was no way I was going to commit to capturing someone's wedding day knowing that my equipment wasn't up for the job, so it was easy to say no without feeling bad about it.

However, once I upgraded my camera body and purchased some lighting equipment, I could no longer use that as an excuse.  I had to admit to myself that the real reason I've been turing down weddings was pure unadulterated terror.  Just the thought of photographing someone's wedding was enough to make me break out in a cold sweat.  I just couldn't imagine myself being responsible for photographing someone's wedding (A WEDDING! OMG!) No way.  No how.  Not. gonna. do. it.

But as requests to photograph weddings have been increasing, it's been getting harder and harder to ignore the fact that I've been letting fear control my decisions. Quite frankly, ENOUGH. IS. ENOUGH. I've been being ridiculous.  I absolutely adore photographing engagements, so there is a huge possibility that I might actually (gasp!) like photographing weddings. But I'm never going to know if I don't get out there and photograph a few, so it was time to bite the bullet and add it to the bucket list.  The good and bad of my life is that I am very easily ruled by lists. So once on the list I knew that photographing a wedding was going to happen, and here we are.

I'm not going to lie, the experience was terrifying and horrible.  But it was equally thrilling and magnificent. (And that pretty much sums up all of life's truly amazing events, doesn't it?)

For three weeks leading up to the wedding I could feel the fear lodged in the pit of my stomach where it had taken root and would not let go.  Every waking moment for those three weeks was spent worrying about what might go wrong, and what I could possibly do to prevent it.  I read and watched more photography tutorials in those three weeks than I did in the past three years combined.  I practiced shooting like an insane woman.  And I learned more than I ever could have thought possible and expanded my photography skills beyond measure in those three short weeks.

As soon as the wedding was over, I came home and backed up the photos just like I always do after shooting.  But I couldn't actually bring myself to look at them. What if they sucked? What if I missed something huge?  The next day, I knew I couldn't put it off any longer and reluctantly started sorting through the images.  After I'd gotten through about a third of them, I was stunned.  The images were actually (dare I say it)... good.

Seriously.  I am on top of the world.  I can't really describe how amazing it feels to have concurred this fear and come out so much better for having done so.

I was really hoping to photograph my first wedding last fall as a second shooter, where the responsibility wasn't quite so huge, but by the time I started inquiring about second shooting for the few wedding photographers I know, their schedules were already full.

Instead, I took Kourtney and Eric's engagement photos back in November, and then they asked me if I would photograph their wedding.  I knew that their wedding was going to be an intimate affair at a small local wedding venue, and I felt like it would be the ideal setting for my first venture into wedding photography.  I was so excited that they asked, and I'm thrilled to say that the wedding (and the photos) went off without a hitch! 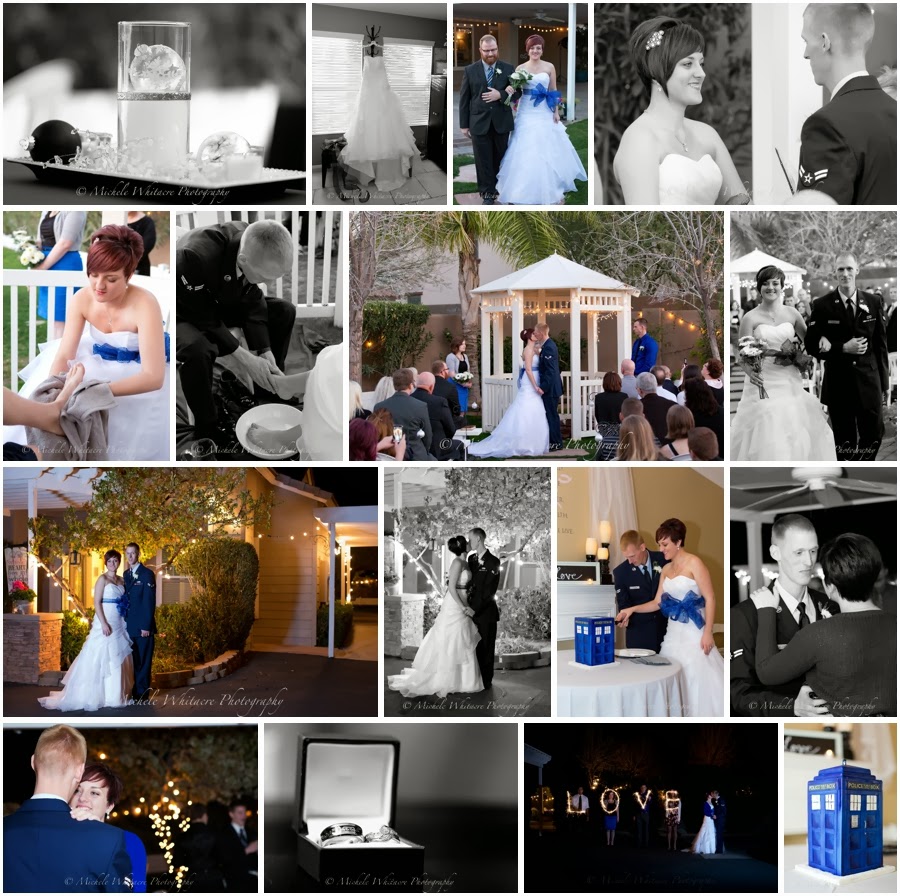